Where is Rob these days???

Sorry – couldn’t resist the play on the “Bob and Rob” duo!

We’re about 7 months late with this, mostly because all of our customers already are aware that Rob has officially retired from Matsch Systems after 42 years.  In that time he has been a witness to the role of computing in our lives, from its infancy when punch cards were the “language” to the present, when there is infinitely more computing power in our “phones” than the mainframes of the past.  His contribution to Matsch cannot be overstated, and the simple fact that we are now able to write this message is a testament to that fact!

In case you’re wondering why you were not invited to his retirement party, it is because he adamantly refused our (Charlie’s and my) offer of one.  Those of you who know him well understand that despite being a talented teacher, Rob is not one who relishes the spotlight.

You can still reach him via his same email which he checks regularly (old habits!).

We will do our best to continue his and Bob’s legacy for the next 40 years, give or take!

Matsch is proud to be exhibiting at the 43rd Annual Conference and Exhibition. Matsch has been serving colleges and universities across the country for decades, and values the opportunity to meet current and future (hopefully!) clients.  The conference is an excellent networking and educational opportunity for those in the telecommunications and IT space.  If you’re attending, stop by booth 219 and say “Hi”!

Thank you to all who provided this creative opportunity for vendors to visit purchasing professionals during the 7th annual Reverse Trade Fair. This being our 4th year attending the event, we were proud to help sponsor this unique event! We had the pleasure of meeting purchasing professionals from over a dozen municipalities and other governmental organizations – all very friendly and receptive to our products and services. Can’t wait ‘til next year!

Today it was Microsoft’s turn to show and tell about their Lync product. The demo was focused on video conferencing and to a lesser degree on presence. Derek Burney, head of Lync showed how Lync is available on many devices – in particular iPad, Windows Mobile Phone, and an Android device. In all cases the software performed as expected, though perhaps understandably, the video was quite choppy. He can probably blame the WiFi for that.

Overall the presentation was impressive. That said, a conversation with a gentleman whose company used Microsoft 365 (cloud-based everything) told me that his experience has been less than great. They’ve been waiting for new releases for key features like call-forwarding, and video. It seems that Microsoft’s cloud offering doesn’t yet provide the features of on-prem Lync systems. We’ll just have to wait and see.

Kevin Kennedy, President and CEO of Avaya gave his keynote shortly after the Cisco address. In stark contrast to the Cisco presentation, Mr. Kennedy proceeded to read the bullet points from the PowerPoint deck. Though somewhat informative, I doubt many people actually absorbed the message. Probably the best nugget was his mention of how enterprise is typically handling the decision whether to go CapEx or OpEx when communications are the focus. He correctly pointed out that those with cash on hand are making the CapEx decision where the expenditure is seen as a key driver of their business. Many others are willing to accept higher operational expense because they either don’t have the money available or may not be willing to go ‘all in’ until a trend develops. Certainly this viewpoint is understandable, as the pace of change in the communications space is daunting.

Robert Lloyd, President of Development and Sales at Cisco provided a keynote this morning which promoted the thought that by 2020 we will have 50 Billion connected devices. The demo that followed, and that filled the majority of the presentation, recovered nicely from a hiccup at the beginning, and showed how connecting devices, people, and software can culminate in better customer experience in retail. The example scenario centered around the purchase of a refrigerator from a “Big Box” home improvement store. From reserving a parking spot prior to arrival, to connecting with a kitchen designer when he realized that the fridge was too big for his kitchen, the demo attempted to sell the idea that the “internet of everything” is inevitable. I’m sure that sounds great to Cisco – just not sure we all need to be THAT connected!

Robert Lloyd, Derek Burney, and Kevin Kennedy from Cisco, Microsoft, and Avaya, are about to square off in the opening presentation for this year’s conference. 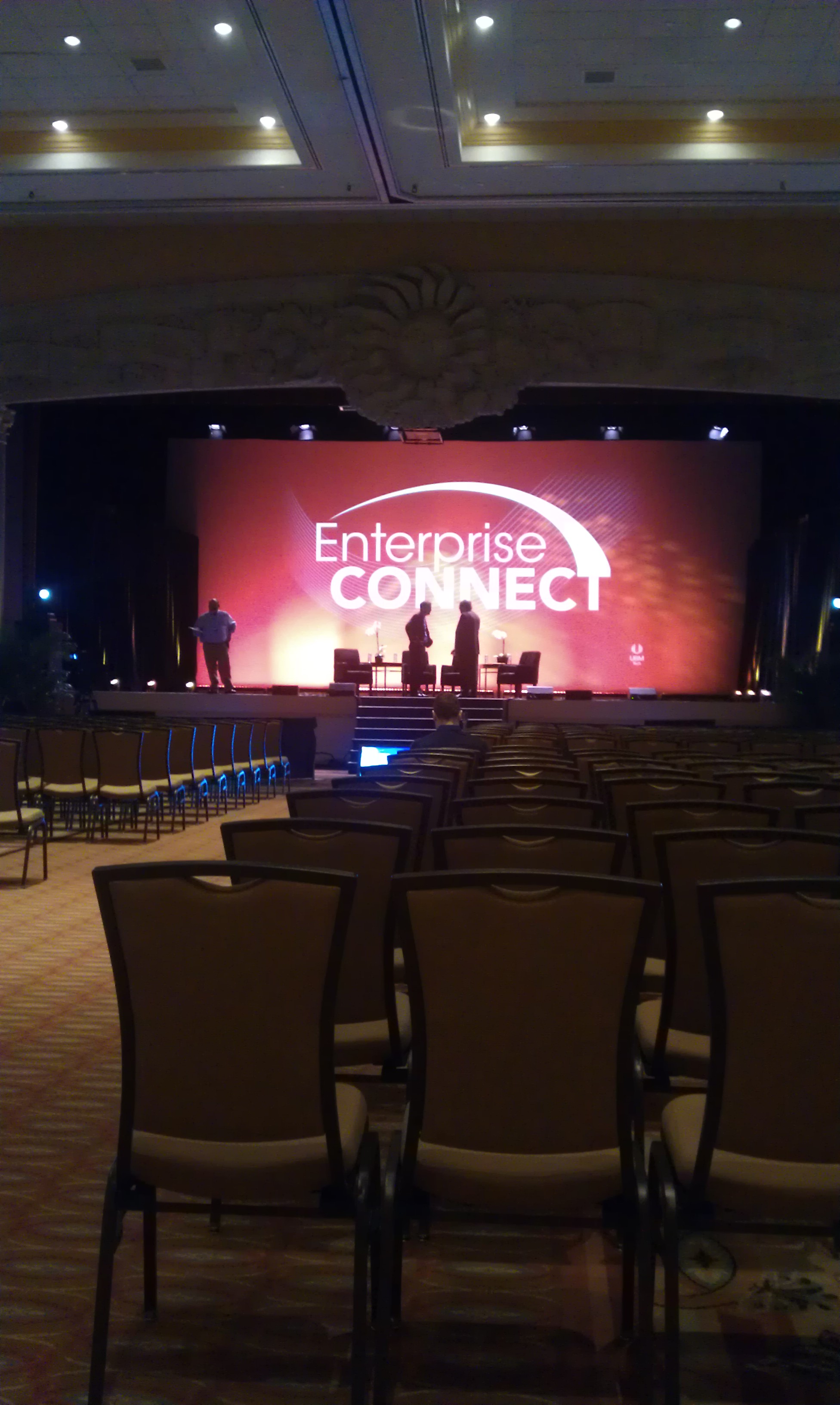 Yesterday ended with an enlightening presentation by Robin Gareiss from Nemertes Research on the business case for UC. This was by far the most quantitative discussion that I’ve seen in all the sessions I’ve been to over the past few years.

Gareiss reviewed their findings from surveys conducted concerning enterprise implementations and installations of IP Telephony, broken down by vendor. She shared their figures about such things as the start-up and operational costs for all the big players, as well as statistics about the average number of endpoints (phones, softphones, etc.) per installation.

Day 1 of Enterprise Connect is underway! The buzz concerning WebRTC (Web Real-Time Communications) is palpable, and the major players in the communication space are all chomping at the bit to get their claws into the enterprise. This morning’s sessions included an introduction to WebRTC which was given by executives from Cisco (Cullen Jennings) and Google (Jan Linden). Interestingly, a live demo from the Google guy was given using Apple’s Safari browser!

At any rate, the introduction was informative, and paved the way for the second session which was a round-robin style presentation given representative from Avaya, Microsoft, Acme Packet (recently acquired by Oracle), and Thrupoint. If I were giving a play-by-play, I might say that Avaya (Val Matula) came out swinging, and poo-pooed this new-fangled WebRTC stuff, saying that at the end of the day, control and accountability are still of vital importance to enterprise, and we’ve heard messages about ubiquitous solutions before (SIP). Perhaps his best point though, at least in my opinion, was that while video communication is sometimes critically important for establishing relationships, its utility declines sharply thereafter. Once trust is established to a degree, collaborative activities become most important. We all can likely point to our own experiences where this has proven to be true.

The first counter punch was delivered by Albert Kooiman of Microsoft who (in true Microsoft form) talked about Microsoft’s “Real-Time Web”, (read “we have our own WebRTC standard”) while speaking about cooperation and collaboration with those who are creating the standards for WebRTC.

Things generally settled down when “Can’t we all just get along” proponents from Thrupoint (David Jodoin) and Acme Packet (Jim Donovan) joined the fray. Each gave a description of their solutions that facilitate connectivity between new WebRTC technologies and existing SIP, Unified Communications and (gasp) legacy PBX communications.

As I wrap up this post, we are waiting for the software providers to get cables hooked up so they can demonstrate all their cool new apps! One presenter calling for the need for a “common API” for all those cables!

Stay tuned – there is more to come!

(Please pardon the movie reference – it was just too good to pass on!)

After helping found our company and working diligently for 30 years, Bob has decided to retire. Bob moved to South Carolina a few years ago with his wife Carol, and is enjoying the beautiful weather and idyllic golfing that surround them. Though he will be missed by his co-workers, he still has ties to West Michigan and we expect to see him occasionally on his visits.

Those of you who know Bob can attest to his desire to help Matsch’s customers by solving their problems in a fair and honest fashion. It is this culture that is a cornerstone of Matsch. That culture is alive and well today, and is still the driving force behind Matsch’s products and services. As Bob would be quick to point out, he was responsible for developing a relationship with our customers during the courtship phase, and could depend on his partner and employees to continue to foster those relationships.

So although Bob’s physical presence will be missed, his help transitioning Matsch to new leadership will ensure a bright future for customers and employees alike.